Code refactoring is not an end of year task

April 14, 2018
Refactoring is one of the best practices of Extreme programming. Even the most stable project requires occasional modification. The idea is to clean up duplication and smelly code. The principle of software entropy suggests that program starts off in a well-designed state, but as new bits of functionality are tacked on, programs gradually lose their structure.

We write a small program that does a specific job well. Later we add new functionality on top of existing program, often in a way that the existing program was not intended to support. In such cases, we can either do a complete redesign or patch some work around. Redesign and rewriting existing code results in extra work, which in most cases we can’t afford. Also, we may miss existing functionality or introduce new bugs.

The principle usually followed is: “If it ain’t broke, don’t fix it!”. However, if a code is made complex due to poor design choices and unnecessary constructs then it starts emanating code smell.

Refactoring is somewhere in the middle of redesigning the complete code and leaving the unmanageable and stinking code as it is. Refer to this presentation by Rick Hickey, the author of Clojure, about how to make incorporate simplicity in the code. Essentially simple code benefits from ease of understanding, ease of change, ease of debugging, flexibility. The smelly code can be simplified using Functions (lambda), Polymorphism (Interface and Abstraction), Declarative behavior (annotations as abundantly found in Spring framework), Coding templates and generators for repetitive cookie-cutter code, and proper encapsulation to reduce the exposed surface area of classes/packages.

The major factor, which triggers the need for Refactoring, is the request for a new feature. Refactoring also helps in keeping the code clean for any newcomer to understand.

In most projects code refactoring becomes an end of year task when there aren't many developers in office and no one is shouting at you while renaming classes and methods. However, refactoring should be a common recurrence of any agile practice. Just like in order to keep your house tidy, you need to clean it every week, in order to keep your codebase maintainable, you need to keep it clean every month or so. If you are buried in project deadlines then developers usually give excuses to put a more dirty code in already what could be a ball of mud. In fact, a project which is undergoing frequent enhancements require continuous refactoring more often. 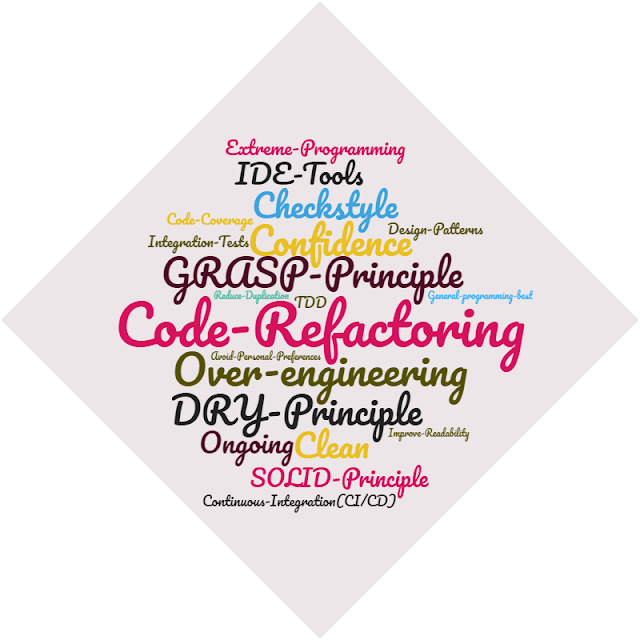 While taking up refactoring cycles/sprints, you should avoid over-engineering as it may lead to complexity and you may lose track of original purpose as why you started refactoring in the first place. You need not target a perfect code in one go and stop the world. Refactoring activity should be an ongoing exercise, not just a year-end project.